Ethiopia: The Birthplace of Coffee

Posted by Matthew on 3/5/2021 to Newsletters
Next Post
Coffee is Ethiopia’s biggest export. It produces almost a billion pounds of coffee per year and over a tenth of its citizens work in coffee production. The word "coffee" even derives from Kaffa – the name of a place in the southwestern Ethiopian Highlands where coffee was first discovered.
All of this gives you a sense of how central coffee is to the country’s culture. It’s no wonder that our wet-processed Yirgacheffe is so popular!
The story of the goatherd
Once upon a time, a long long time ago, in the 9th Century AD to be exact, an Abyssinian (Ethiopian) goatherd named Kaldi was tending his goats in a forested, mountainous area that was new to him. Gradually, he noticed that his charges were behaving oddly. They were skipping, rearing and bleating loudly. Kaldi was startled and placed a stone into his sling, expecting to see sneaky foxes or daring wolves. He could find none. The goats eventually calmed down and Kaldi forgot about the incident. The next day, the goats once again started skipping, rearing and bleating loudly. He looked more closely this time and noticed them eating bright red berries from a nearby dark-leafed shrub. Kaldi tried a few berries himself, which he found bitter to the taste, but soon was skipping, rearing and bleating loudly along with his goats.
Since that time, Ethiopian have made use of coffee beans in cultural ceremonies and the Oromo people have combined coffee berries, squashed flat and shaped into balls, with animal fat as a source of energy on long journeys. We prefer it dried, roasted and brewed, but that’s just us.
The coffee arabica mothership
Ethiopia is the mothership of coffee arabica. The variety is immense, thanks to variations in altitude, soil composition, climate (cool, tropical) and areas where coffee grows naturally, in the shade, without need for artificial fertilizers or pesticides.
Yirgacheffe coffee comes from a town in the Sidamo region, a high plateau north of Harrar. The area is mountainous, densely wooded and surrounded by national parks and wildlife sanctuaries. If you typically drink your coffee black, this is absolutely the coffee we recommend. Yirgacheffe coffee has incredible terroir—intensely aromatic, clean and refreshing. Some compare the tasting notes to those of a bright white wine.
The beans are wet processed, yielding grounds with a sweet, caramelesque aroma and a cup with pronounced florals, citrus, a medium body and a unique soft-toned acidity. Citrusy and complex, this coffee has its own tangy, bitter sweetness—no cream or sugar needed! If you haven’t tried a cup, we highly recommend it. 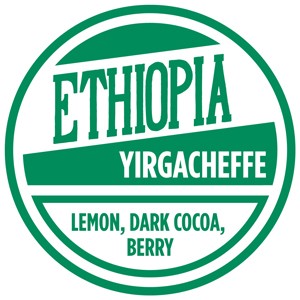